Pycharm is a Python IDE created by JetBrains. It has a free to use 'community' and 'education' editions and a paid 'professional' version and runs on virtually all modern Linux platforms. Pycharm's incredible portability comes from the fact that it is built on Java.

For a quick start introduction to Pycharm see my Pycharm Quickstart article.

How to install Pycharm on Linux

There are a number of ways to install Pycharm on Linux, namely

The following table list the requirements to run PyCharm. If you have older hardware and the latest version does not work on it, I suggest downloading a previous version. Jetbrains have every version of PyCharm available for download going back to the first release.

These specs are taken from the PyCharm installation guide.

Older versions of PyCharm will run on 32bit processors and it seems that the Java runtime is the issue running the latest version of PyCharm on 32bit, not necessarily PyCharm. I was able to run PyCharm 2016 on a single core i386 32bit CPU on my 2006 Acer laptop.

Pycharm can be installed a number of ways on Ubuntu.  Remember that Pycharm is Java based so the Java runtime is a prerequesite.

To check if you have Java installed, open a terminal and run the following command:

To install Java on Ubuntu, use the the following command,

This will install the default version of Java.

The easiest way to install Pycharm and keep it updated is through the Jetbrains Toolbox. To install the toolbox download it from the Toolbox Download page.  The Jetbrains toolbox cannot be installed through a package manager like snap or aptitude.

Here are the steps I followed on Manjaro 21.1.5 to install the Jetbrains Toolbox. The same steps work on Ubuntu.

Running the toolbox executable will install it. I had some trouble running the Jetbrains Toolbox after initial install, it would open the toolbox, but the content was blank and then it would crash. I restarted my system (restarted my Virtual Box VM) and then I was able to run it successfully.

The benefit of using the Jetbrains is in maintenance.  When a new version of Pycharm is detected, the Toolbox will flag it for updating.  Here is an example of the Toolbox showing that a new version is available.

Snap is a cross platform package manager.  I recommend using snap if your Linux distribution supports it.  Snap solves dependency conflicts by installing the application into an isolated file system space and running it fully encapsulated, similar to how Docker containers are isolated.

If snapd is not installed, you can install it on Ubuntu as follows:

Aptitude is the Ubuntu package manager.

PyCharm can be downloaded as a gzipped tar file.  Once you have installed and confirmed your Java install, follow these steps to install it.

The command to extract the gzipped tar file is as follows

Note: You'll need to update the file name to the name of the downloaded file.

The Jetbrains Toolbox is not compiled to run on any ARM architectures and cannot be used on a Raspberry Pi.

PyCharm version 2021 will not run on ARM. You will have to install a previous version. Fortunately Jetbrains allows downloads of older versions. Here are the versions I have been able to run on ARM:

Where does Pycharm install on Linux

The Toolbox install location can be changed via the Toolbox settings. 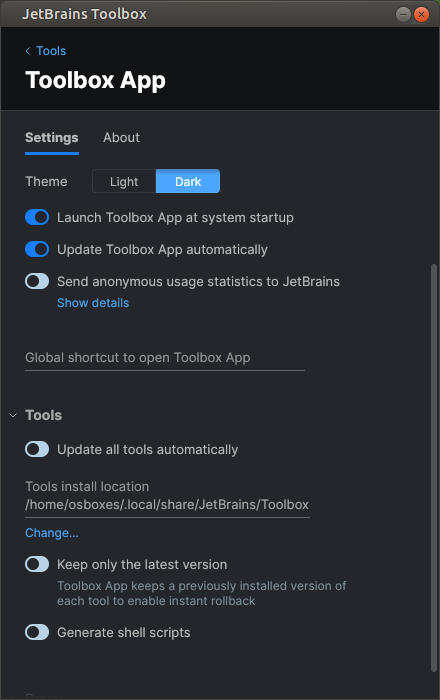 The above screenshot shows the file install location for the Toolbox apps set to /home/osboxes/.local/share/JetBrains/Toolbox

PyCharm snap install can be found in the /snap/pycharm-community/current directory.

Note that it is possible to install PyCharm using the Toolbox as well as a snap package and that both of these installs will coexist.  The Toolbox is also able to detect other PyCharm installations and will list them as 'Manually Installed'.  T

If PyCharm is installed via the Debian package installer APT, it will be placed in the /usr/bin folder

Since the manual install requires you to extract the download, the install location is just the extract location that you choose.

How to run code in Pycharm Linux

Your python project can be executed and debugged directly within Pycharm.

How to uninstall PyCharm on Linux

Uninstalling PyCharm is as easy as installing it.

The Toolbox provides the easiest way to manage JetBrains tools, including uninstalling them. 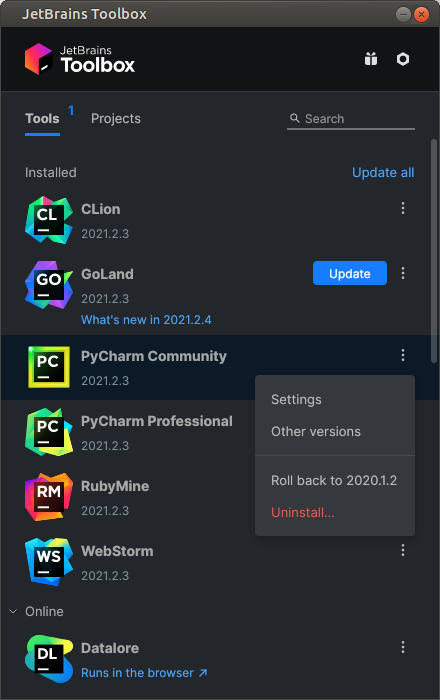 As you can see from this Toolbox screenshot above, uninstalling is as easy as clicking on the three dot menu next to the installed application and selecting 'uninstall'.

To uninstall the community version with snap, use the the following command,

To uninstall the professional version with snap, use the the following command,

PyCharm is a great IDE option for Linux.  It runs on most modern flavours of Linux and can be installed in many ways.  It also runs on ARM architectures like Raspberry Pi and Jetson Nano.

For more information on PyCharm see my other articles